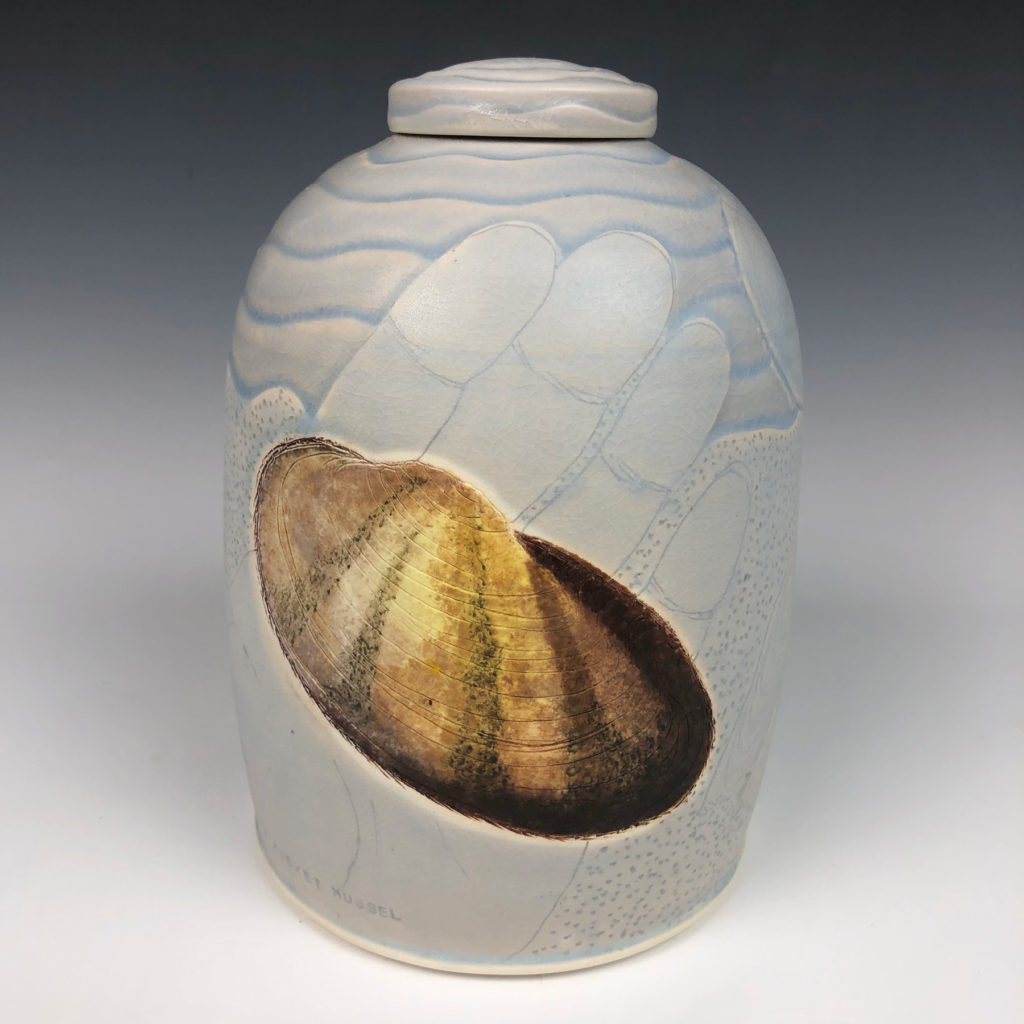 This freshwater mollusc is predominantly found along the sand and gravel shoals nearer to the shores of midwestern rivers and streams. It’s thin shell, darkening from an olive-yellow color to a waxy brown with age and banded with green striping, protects it’s bivalve consumption of local plankton. While it’s abundance within these streams is an indicator of the quality of the water source it inhabits, it’s depleted population reveals the effect of run-off pollution and soil erosion into these streams. In order to procreate effectively, the Neosho Mucket mussel relies on the varied populace of black bass, on which it’s parasitic young attach until they mature. They attempt to find a footing within the fine gravel and sand, away from predators, surviving as long as 30 years within these protected shoals.

In an effort to sustain and replenish the viability of the Neosho Mucket, effort needs to be made in the conservation of it’s immediate water source.  While the U.S. Fish and Wildlife Service has designated some 483 river miles throughout the midwest as a critical habitat for these mussels, water conservation from these aquatic resources is crucial to their survival. As well, the importance of planting trees and maintaining gravel or dirt pathways near the river areas, reduces the amount of polluted runoff and soil erosion that affects the chemical and geologic threat to the existence of the Neosho Mucket. The Great Plains Nature Center is an education center that “providing opportunities for the public to investigate, understand and develop an appreciation for wildlife and the environment, while promoting sound stewardship of natural resources.” They have been promoting education about the Neosho Mucket to help with public awareness to protect this species. 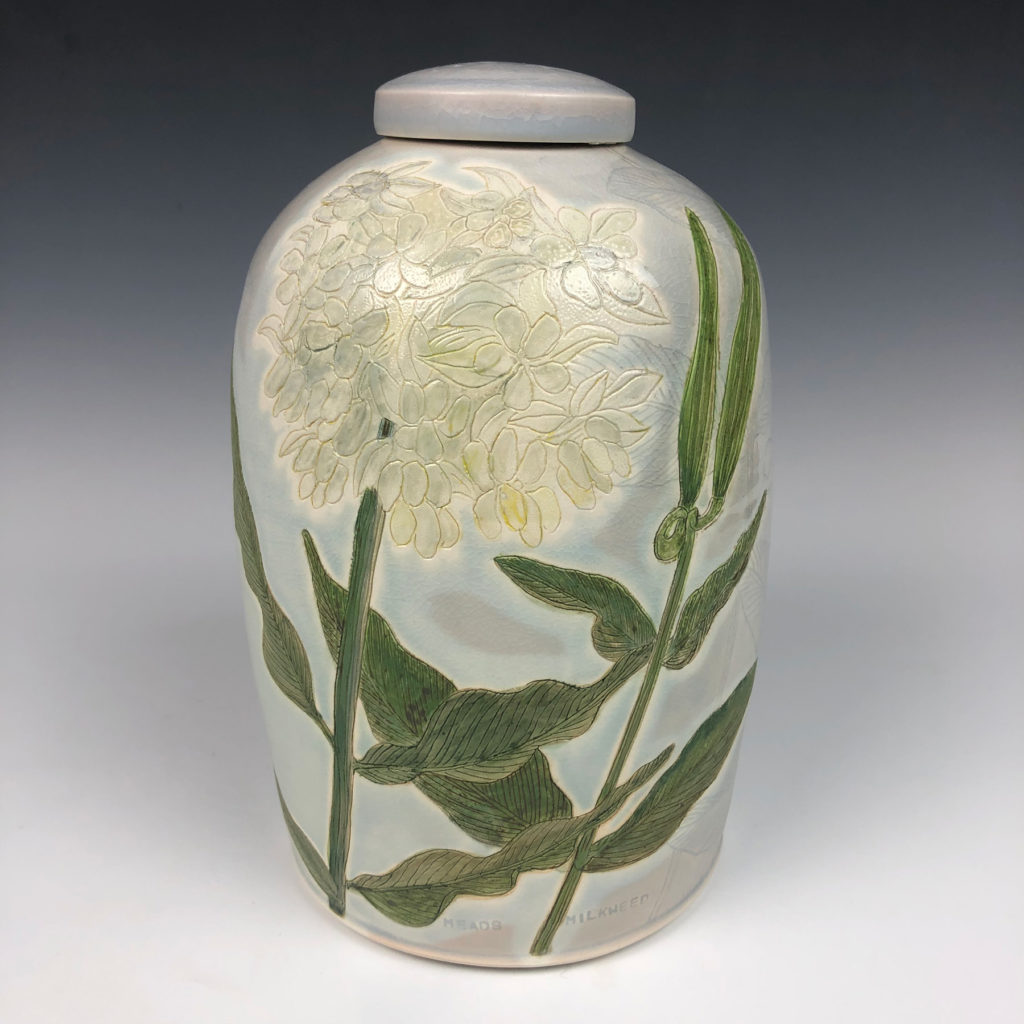 Dappled throughout the prairie grass landscapes of the midwest, this single-stemmed milkweed variety, with waxy white leaves and a yellow-green umbrel of flower pods sitting atop, has become a threatened species owing to the longevity of its germination cycle impacted by modern plowing and mowing practices. Dependent on the local bumblebee and miner bee populations for pollination, it has a relatively short pollinating period between late-May and mid-June, when the flower pods begin to develop. By late October, the umbrella of green pods, 6-15 in total, has matured into a canopy of “hairy” fruit pods. The seeds that develop with these pods will take an additional 15 years to mature before they will become germinating flowers. In this time, it is likely the individual stems, along with the prairie grass, will be cleared from the landscape.

Modern agricultural practice, in particular hay mowing and baling, seems to be the most significant impact on Mead’s Milkweed status as a threatened species in Kansas. Not only does mowing interrupt the long germination period, but it eliminates viable seeds from the landscape altogether. This creates fragmented dispersal areas in which these perennial herbs would be naturally pollinated. The best efforts to revive this species may be to preserve as much of the natural habitat surrounding these stand-alone flowers, re-seeding eradicated areas, and protect existing habitats from invasive species of plants that restrict abundant growth of Mead’s milkweed. Supporting local land trust is very helpful to this plant! 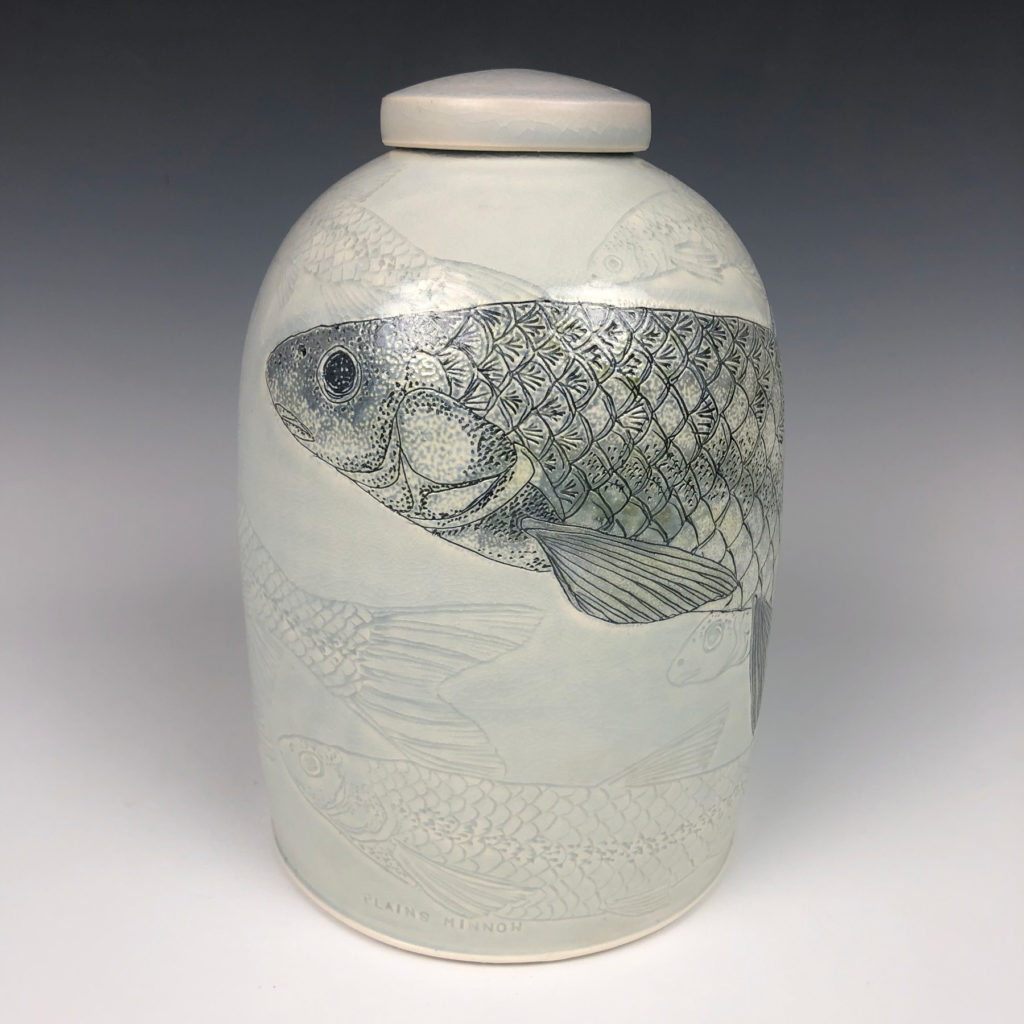 Once the most prominent fish population in the state of Kansas, the Plains Minnows numbers have diminished significantly since the 1950’s; it’s numbers are most prominent in the Cimarron River currently. This species of minnow grows no longer than five inches in length and it is predominantly silver in color with shades of tan and olive towards its rear fin, making it ideal as a bait fish. However, its advantage to the average fisherman is not what threatens the species viability. It is instead, the necessity of natural turbidity cycles from low-flow sandy-bottomed feeding grounds to high speed water flows that carry the semi-buoyant eggs downstream during their hatching period.

The introduction of dams, reservoirs and drainage systems affiliated with human expansion along these waterways, impacts the reproductive cycle of the Plains minnow, once protected by an uninterrupted flow of the rivers, tributaries, and natural sedimentary shifts, particularly in the summer months. While there are a number of monitored “critical habitats” within Kansas alone, it will be careful planning of future permits that affect these waterways, by finding solutions that preserve historical flow patterns. Currently in the United States about 80% of existing dams are more than 50 years old, and it is unclear what percentage of these older dams are actually functioning. Damn removal is complicated, there is concern about the build-up of sediment and possible spreading of invasive species, however, many damns have out lasted their use and a return to a free-flowing river would help with the health of water quality and fish such as the Plains Minnow. 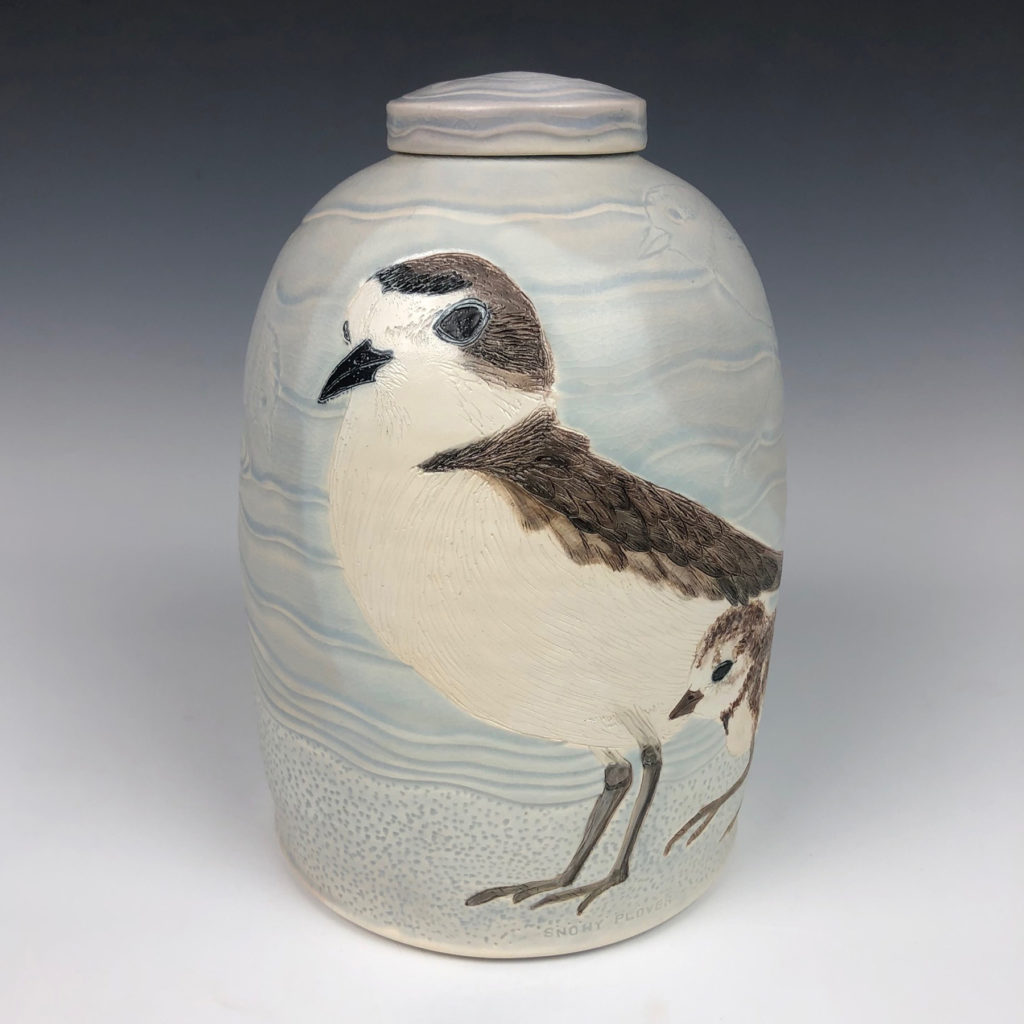 The snowy plover is a rather diminutive beach dweller measuring only six inches in length at maturity. Pale brown in color with a distinctive thin black beak and legs, it’s’ only other primary markings are dark spot atop its head and dark streaks behind each and partially ringing its lower throat. This plover typically lives along beach shores, salt flats, river bars, and occasionally wetlands as a migratory summer visitor to Kansas, in its nesting season. This nesting period makes it especially vulnerable to human interaction in areas of recreation, as the plover builds its nest on the ground relatively unprotected from foot traffic and unforeseen predators. The snowy plover is a fairly modest breeder. The females rarely have more than three eggs at once, even though they may brood twice in a single season. The hatchlings stay only a few hours in the nest before they are left to forage and fend for their survival, with less than weeks’ attendance of one or both parents.

Though there are designated protected areas for the snowy plover, such as Quivira National Wildlife Refuge, they remain vulnerable during their breeding season. If people and pets staying away from nesting areas would be a huge help to this species. So too, it is important that no trash be left in the area, as natural predators like the raven and crow are attracted to the debris, thus threatening the delicate plover population. Like many endangered species, the snowy plover is equally affected by habitation changes; the invasion of both European and American beachgrass into their breeding sites limits the quantity of nesting spots among driftwood and open shore, but also affects the availability of certain marine life and native insects that the plover and it’s young thrive on. The state of Kansa does currently have a Plover recovery plan, though its success has been inconsistent. Protecting the wetlands in Barton County and portions of the Cimarron River are important breeding grounds, and protection of these areas are key. 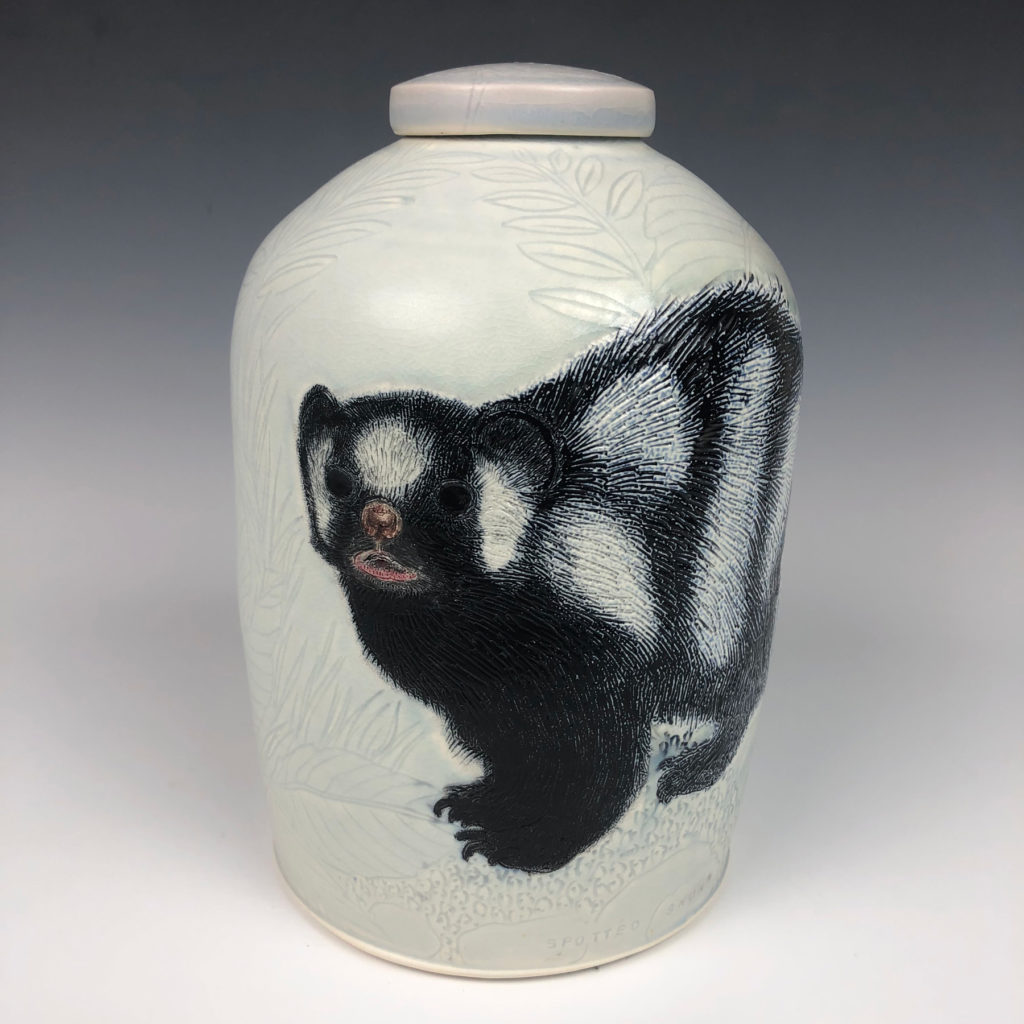 This weasel-like mammal, often referred to as a civet cat, resembles it’s striped cousin in black and white coloring, but not in size or patternation. Instead, the markings vary in a series of spots and rounded striping from it’s head to the end of it’s bushy, white-tipped tail. These skunks remain small, growing no larger than two feet in length, typically. Despite being petite in size, this skunk is able take a peculiar defensive posture against natural predators, like the great horned owl. This little skunk will stand, inverted, on its two front paws. Not only does it appear larger in this stance, but the spotted skunk can also charge the threat in this hand-stand position, while releasing it’s odiferous scent. Like other nocturnal omnivores, the spotted skunk’s diet of plants, insects, and smaller mammals make it ideally suited to rural homesteads and farming areas as pest management.

Although the exact cause of the spotted skunk population decline is not known, there are three significant factors of concern. The uniquely patterned pelts of these skunks were highly sought after as a commodity of the fur-trade industry, reducing their numbers until a harvesting ban, in the state of Kansas, was enacted as a preservation effort in 1977. While these small scavengers inadvertently aid farmsteads, the increasing use of pesticides may be affecting the food-chain on which they thrive. Other changes in environmental control, such as mandatory brush fires, also affect the habitable territory for these small, burrowing mammals. Should a spotted skunk be seen in the wild, the wildlife department will collect data that aids in long-term conservation plans that preserve the natural habitat of these animals. It is always a good idea to reduce chemical pesticide use that may affect species of insects, small mammals, and vegetation that serve this skunk’s dietary needs. One last viable option for protecting this vulnerable species, is the consideration given to its inclination to burrow and forage along brushy fence lines, structures, craggy rock formations before clearing vegetation from these areas. Support of local land trust would help ensure this odd little skunk has suitable habitat. 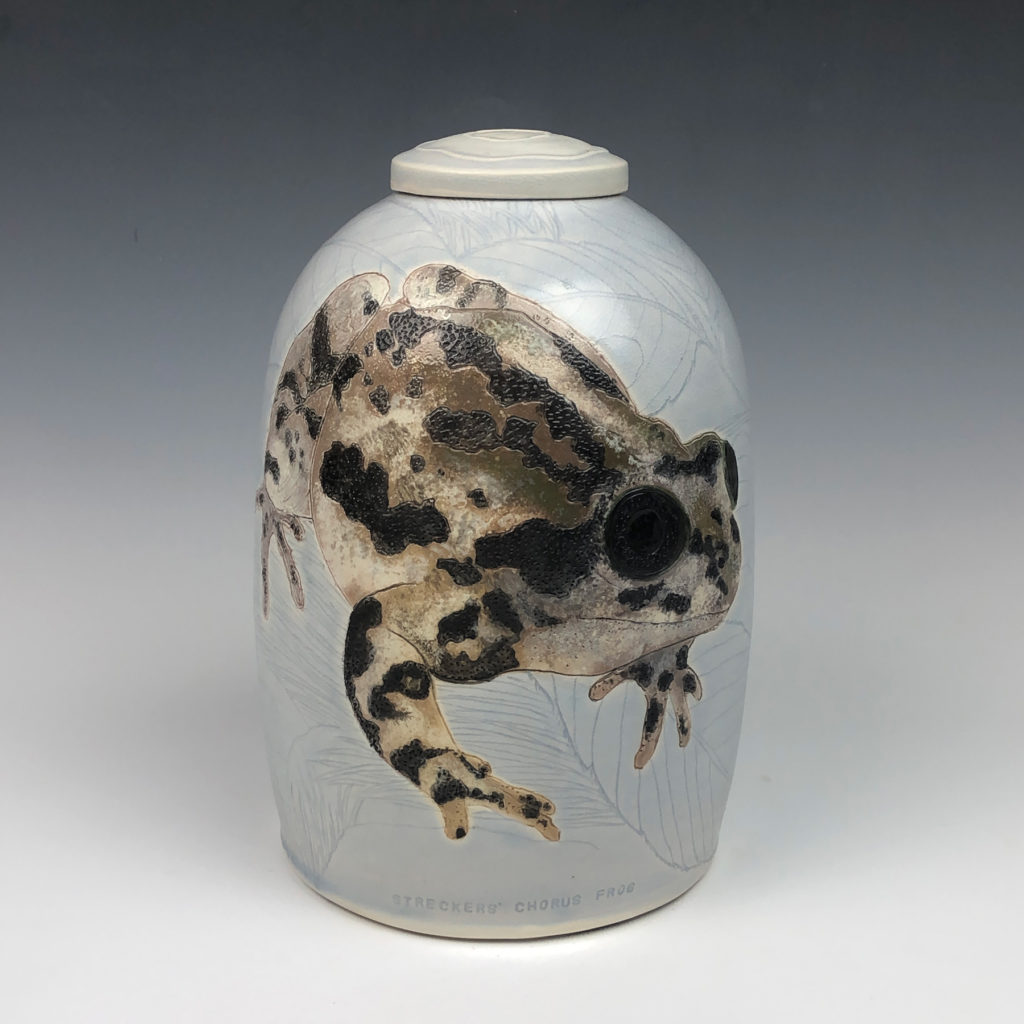 Th Streckers chorus frog distinguishes itself as a species from other choral frogs, in both marking and burrowing characteristics. Typically, this frog only grows no larger than one and a half inches long, with forearms, fingers, and skin texture more closely related to that of the toad family of amphibians. Unlike its cousins, this species lacks the continuous black marking across its upper lip. Though it is olive-green in color with spotting along it’s backbone, it has a distinct white belly with a yellow-orange groin, that is unlike its closest relatives. The purpose of the stout forearms is to burrow head-first, approximately six inches beneath the surface, where it spends the majority of life. These burrows are found in a variety of aquatic environments along the Arkansas river valley, extending from Kansas to Louisiana, and include marsh and swamp environments as well as grassy pools only briefly filled with fresh water, in mountainous terrains. Emergence from these protective burrows is almost exclusively procreative between the months of November and March. Nocturnal in nature, only the males begin to sing a pattern that set into pattern by a few and echoed into choral union by all, in an effort to lure female attention. These females will lay several hundred eggs on vegetation just beneath the waters surface where they are then fertilized by the vocal males and left alone to develop over a couple of months until maturity.

The vulnerability of this species in Kansas is that they lack specific breeding grounds from year to year, limiting environmental protection to only four southern counties within the state. Many of the breeding environments exist as run-off pools in areas where land development and logging are having an impact on necessary drainage into the essential habitats for these frogs. As is always a conscience effort to address in species conservation, personal efforts to reduce the use of chemical pollutants that may concentrate in such drainage areas has a positive impact on this aquatic species. The Kansas Sierra Club is a nonprofit member supported public interest organization that promotes conservation of the natural Kansas environment. Supporting a group like this through volunteer work or donations can help the survival of all species in the state.